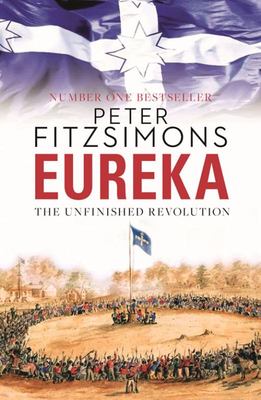 Eureka Stockade - The Unfinished Revolution In 1854, Victorian miners fought a deadly battle under the flag of the Southern Cross at the Eureka Stockade. Though brief and doomed to fail, the battle is legend in both our history and in the Australian mind. Henry Lawson wrote poems about it, its symbolic flag is still raised, and even the nineteenth-century visitor Mark Twain called it- " a strike for liberty".Was this rebellion a fledgling nation?s first attempt to assert its independence under colonial rule? Or was it merely rabble-rousing by unruly miners determined not to pay their taxes.In his inimitable style, Peter FitzSimons gets into the hearts and minds of those on the battlefield, and those behind the scenes, bringing to life Australian legends on both sides of the rebellion.

Peter FitzSimons is a journalist with The Sydney Morning Herald and Sun-Herald. He is also a regular TV commentator, a former radio presenter (very successfully, with Mike Carlton on Radio 2UE) and is also a former national representative rugby union player. Peter is the author of over 20 books - including Tobruk, Kokoda, Batavia and biographies of Nancy Wakee Kim Beazleye Nick Farr-Jonese Les Darcy, Steve Waugh and John Eales, and is Australia's biggest-selling non-fiction author of the last ten years. Earlier this year, Peter was named a Member of the Order of Australia for service to literature as a biographer, sports journalist and commentator, and to the community through contributions to conservation, disability care, social welfare and sporting organisations. He lives with his wife, Lisa Wilkinson, and their three children in Sydney.